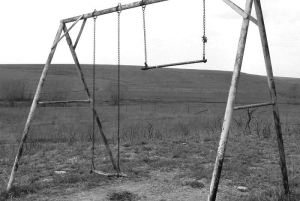 If you have ever noticed as you are talking to me, I wear a silver necklace. I have worn this same necklace for many years and some people have made the remark that they notice I never take it off. There is a reason for that… it is a reason that has actually evolved over time, but now I understand its full weight. This necklace, given to me by my girlfriend (now wife) so many years ago was actually a replacement to a necklace I wore nonstop that started to fall apart. To tell you what it symbolizes will require a story…

Do you ever get the feeling you are being watched? 16 years ago, as I walked through a children’s neighborhood park, I had this feeling. I felt as if I were being followed or watched or stalked. My curiosity was overwhelming so I started to look high and low for the culprit. It was only me and a friend walking in this area so it was an odd feeling to have. As I tried to get my mind off of the concept, I looked up and I found the source. A little boy had climbed a tall tree and was watching every move we made.

We were in this park as a result of being on a mission trip with our youth group to North Dakota. The youth group had split into 3 groups

and our smaller group mission was to clean up this park and to teach object lessons (and play with) kids that we found there. The problem was…there were no kids at this park….well, except this small boy hiding in the tree.

Later, we found this woman who had walked to the park and told us she was this boy’s aunt. We found out the boy’s name was Forest and he was 4 years old. The aunt was somewhat nervous because this particular park had a reputation as a drug dealing hub. Forest was in danger simply by playing at this park.

After a few days of our mission, we saw more and more children come to play at this park. We cleaned it up and made it usable. Parents came to greet us, bring lemonade, and thanked us for making this park a safe play area once again. These children came as a result of Forest and his family spreading the word that the park is now a place of fun… drug dealers, for some reason had moved on to another spot to do business.

At the end of the week, I bought a necklace because I wanted something to remind me of this event. Now, this necklace reminds me of two important truths.